Created upon returning to Sydney from the UK, this reel was deliberately designed to have a bit of an edge to it. The music selection was the very first decision made, and the in-your-face feel of it demanded a tight edit to punctuate the shots. As such, the shots were speed-ramped and filled with jump-cuts to meet the music.

This attitude was a strong reflection of my feelings at the time; returning from the UK was not something I wanted to do, and the market in Sydney was almost dead in early 2012. I had also developed a strong sense of confidence, having successfully freelanced around London to generally excellent feedback. So the odd mix of desperation and confidence led to this slightly unwieldy but tight sizzle reel.

The music is an edit of "Watch This", an instrumental track by Slash, featuring Dave Grohl and Duff McKagen 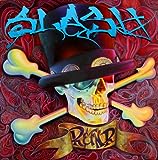